Today we wore heritage kit. Something South African to celebrate our beautiful country.🤍🤍
After a hearty breakfast in Villiers this morning with the Life Hospital Suikerbosrand Team, Kubashnee and Kevin joined us for the first 25 kms of the day.
The ride started with a similar ride to yesterday with great roads and beautiful scenery and fields and fields of stunning cosmos everywhere. After tea the Life Hospital team sadly left us and we travelled another 25 wonderful kilometers on some fantastic roads. We then hit roadworks and for more than 20 kilometers we travelled on very difficult dirt roads. The gravel was very loose and rocky and VERY slippery. Siliziwe and I got to the dirt section at almost the same time, each in a different lane. Siliziwe hit the dirt and his front wheel slipped out in front of him and he crossed over into the next lane where I was heading. I tried to change directions at the last second and there was no other alternative, so I rode over him ☹. As I collided with him, I flew over my handlebars and hit the dirt next to him. Mark, the fantastic paramedic rushed over to save the day. Siliziwe had lost the skin on his knee which was cleaned and bandaged, and I just had a bruised knee and small scratch so we both jumped back onto our fortunately unhurt bicycles and continued the treacherous slippery dirt road. Nico also had a small slip and slide on the dirt but was also fortunately unhurt.
This now brings the total number of accountants on this year’s 1965ride to have an accident to 3 of the 4 of us. Ride carefully John!!

The word of the day was POTHOLE! Because even the parts where the road was tarred, there were so many potholes we had to dodge them along the way.

The potholes were all numbered as part of the extended works program. Each number related to the person that fixed them and they were then paid for the number of potholes they had repaired. The story is not all bad, for the remainder of the journey, the cosmos was spectacular, the khaki Bos smelt amazing, the clouds were making beautiful pictures in the sky and the scenery was fantastic.
We even saw albino blesbok!  We arrived safely in Reitz only to see that we were one km short of 100km for the day, so we drove up and down the road for another kilometer before arriving at Poelanies guest house.

We did our usual after ride stretches and after a yummy lunch (which we had prebooked at our briefing on the first night) we happily handed in our washing and relaxed for the rest of the afternoon. Supper was a delicious lasagna with salad and bread and tasty apple tart and ice cream. This was followed by Laurence winning the 1965ride spirit award for the day because of his helpfulness with everything and his great positive attitude. There was much reminiscing by the 5 old boys around the table with many laughs and great stories. Today was really tough and we are very tired. The terrain was very difficult to navigate on our road bikes, and it was hot and dusty.

We are hopeful that we will have much more fun tomorrow again.😊 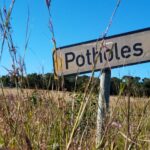